If the video is in Czech, you may switch the English subtitles on.

It may sound unbelievable, but there are pure mechanical devices which allow to measure areas of arbitrary shape using pure mechanical way, usually by measuring revolutions of some special wheel. These devices are called planimeters. 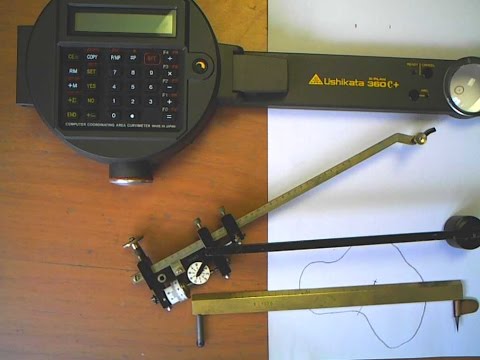 To find area is a common problem in mathematics. For some regions you can use formulas. What about irregular regions? This video shows three planimeters in action: polar planimeter, roller planimeter and hatchet planimeter. Polar and roller planimeter are based on Green's theorem, as described here.

It is worth to mention, that the digital planimeter used in this video is atypical among the planimeters - it lacks the integration wheel. The planimeter relies on computation brute force and discretization of continuous process of measuring. From the mathematical point of view, Shoelance formula, which can be considered as discrete counterpart of a special case of Green's theorem, is used. 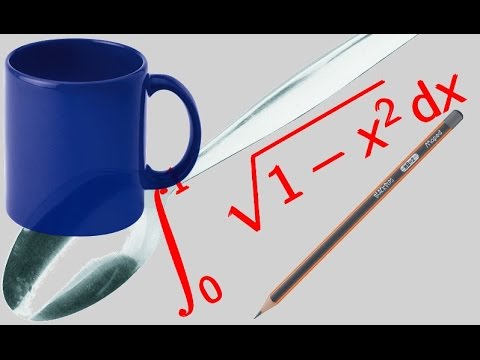 The area can be measured using planimeters - mostly pure mechanical devices. Some of the are incredibly simple, the simplest one is Prytz planimeter. It is also astonishing that this planimeter can be replaced by some tools of daily use. The attached video shows how to measure the area of a quarter of a circle (given by certain definite integral) with a kitchen spoon.

Note that the method presented in the video is not optimal. It is better to start the measurement in the center of the mass, as described on the page here.

Video shows how to measure area using just knife as a replacement for the classical hatchet planimeter. The example is taken from the photo of solar eclipse. The language is Czech with English subtitles. The pleasant music is provided by the Czech funky-folk group Naslouchej mandarinkam. The photo of the eclipse is taken from Wikipedia.

There are many videos of mechanical calculators on Youtube, most of the show just the basic four arithmetic operations and extraction of square root via Toepler's method. I decided to provide videos which differ from the other videos. Hope, you will enjoy them.

The last of the Mohicans?

Cellatron R43SM is one of the last (and thus most elaborated) models of mechanical calculators ever. Produced from 1959 till 1969 (a probably slightly longer) was introduced only two years before the first electronic calculators. The video shows restored and fully working machine and includes detailed explanation what happens during the automatic division in keyboard and registers. 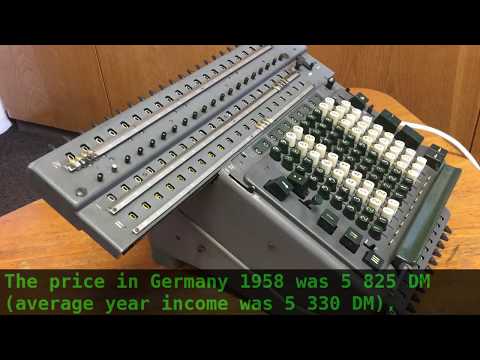 The video describes one of the most expensive calculators on the market - MADAS ATG. The capabilities (and price) of this model is accelerated by adding second counter register and additional summation register. The video shows two possible applications of these registers: dividing with setting which preserves the dividend in the register and summation of numbers together with the squares of these numbers, which is useful in statistics.

Three Marchants and MADAS in a speed test 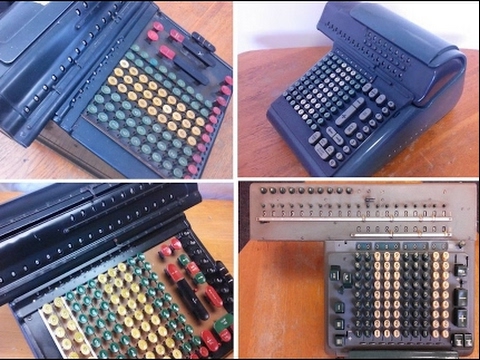 In the video we run an artificial computation consisting in 100 subtraction cycles and compare the time required to finish this task for three different Marchant mechanical calculators and one MADAS. Marchants have been proved to be very fast machines. 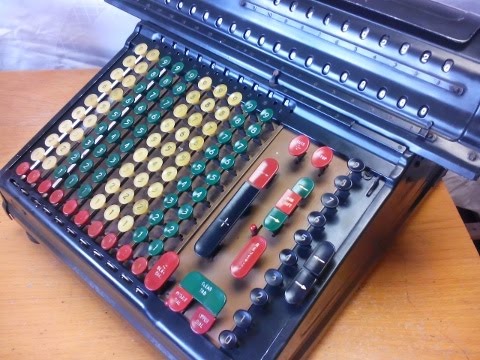 Marchant Silent Speed has been introduced by the model D, see the video below. The model ACT presents a next generation with higher speed and advanced possibilities in multiplication. The article describes the working calculator produced in 1946. 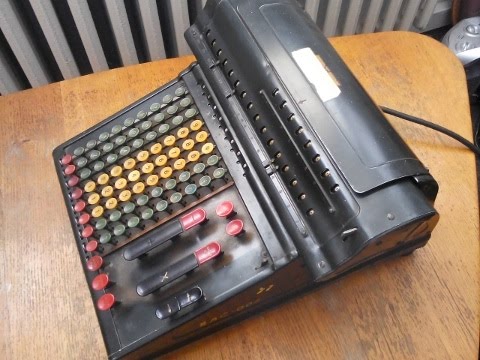 Marchant Silent Speed calculators are the peak of the technology in the age of mechanical calculators. The principle of proportional gears and the comparator for division turned this machine into the fastest mechanical computer of the world (that time). The Marchant calculator was an important device used by researches working in Los Alamos on the first nuclear bomb.

Due to the complexity, now it is rare to see a working piece. You can enjoy one in this video.

How does this thing multiply? A view under the cover. 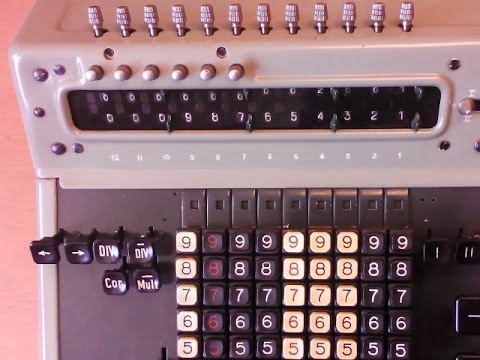 The video show a very rare model Mercedes Euklid R27. This calculator is an interconnection between model 21 with manual multiplication and fullautomat model 37. You will see how the product is build using repetitive additions and carriage shifts, both performed automatically according to the setting of the special product register. You can enjoy also a view under the cover and a comparison with Hamann Automat S, the fastest multiplicator that time.

Radetzki march on Madas 20 AS 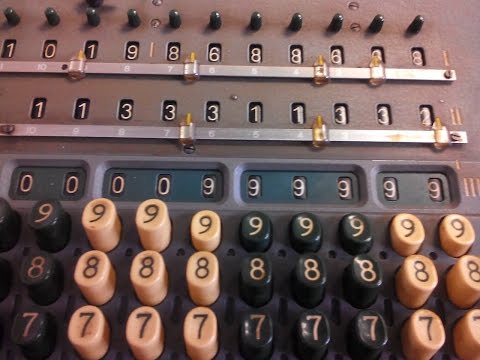 Madas (shortage for Multiplication-Automatic-Division-Addition-Subtraction) was always one of the leaders of the market of mechanical calculators. Strong competitor with very expensive but also highly advanced calculators. The video shows one of the last models, Madas 20AS, with fully automatic multiplication and tabulator buttons to govern the precision of the division.

The multiplicator has been stored in a register below the keyboard. Special features which were not common on the market we the following 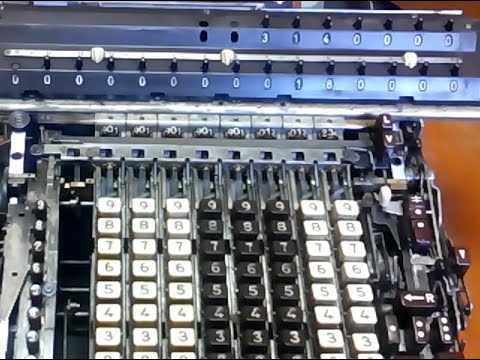 This video is accompanying video to the whole article on this interesting calculator with semiautomatical division. The calculator is a German product. It reminds the Friden line of calculators and it is one of the most advanced mechanical calculators ever. Produced in 50's and 60' and very expensive. Usually, these calculators can be found as defect on auction sites. The article describes some experiences with renovation of this calculator. 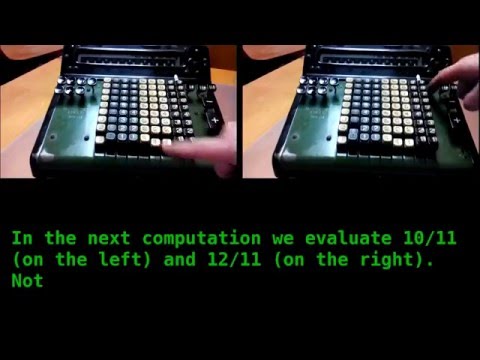 The video describes Mercedes Euklid 21, one of the top calculators produced in early 30's. We show some funny computations (such as a vampire number), some features unique for this calculator and also compare how fast are various quotients evaluated (due to the oscillating division, the evaluation of 10/11 is very fast but 12/11 very slow). The quotient 0/0 is also included :). 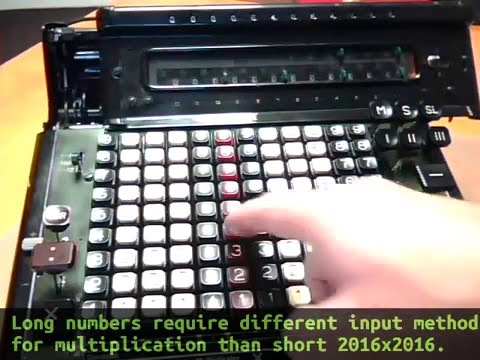 The number 2016 is somewhat special: the sum of the square and the cube of this number has 10 digits and each digit from 0 to 9 is exactly once in the resulting sum. And 2016 is the only number with this property. As a celebration of the New Year 2016 I prepared (in December 2015) the video where the above sum is computed on three different models of Mercedes Euklid calculator from 30's.

How to read a negative result on mechanical calculator 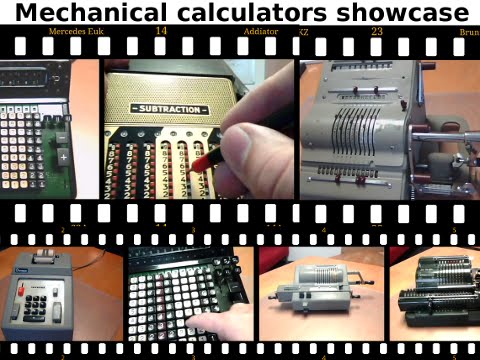 A big comparison (12 calculators) which shows what you can read on the display of mechanical calculator when the result of the computation is negative. Includes description how to read the answer, how to convert into classical format with back transfer and includes also winners of the test which show the negative numbers directly.

When computers were humans 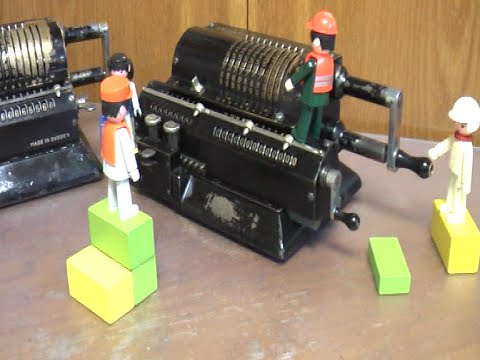 In old ages, the word "computers" described people performing calculations. The video describes one of the first mass produced mechanical calculator - pinwheel Odhner calculator. We look a little bit to the history, inside the calculator and try some advanced computations. The language is Czech, but the video contains English subtitles - just switch the subtitles on in the Youtube player. 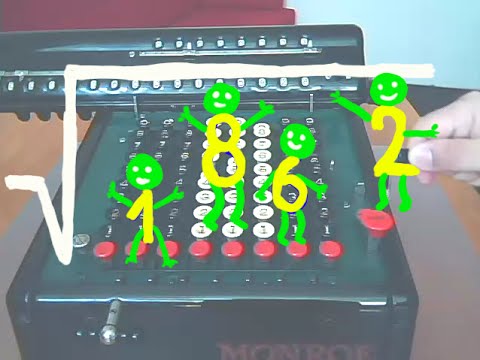 The video shows evaluation of the square root of 1952 to five digits (three decimal places) using Monroe multiplication tables. The computations is done on Monroe calculator Model K from 1920.

The video starts with introduction the parts of the calculator, application of Monroe tables follows and the whole computation is also shown. The final part of the video explains mathematical background - linear approximation.

Why the square root of 1952 has been chosen for the video? The year 1952 is the year when the first mechanical calculator capable to extract automatically the square root has been introduced to the market (Friden SQRT). 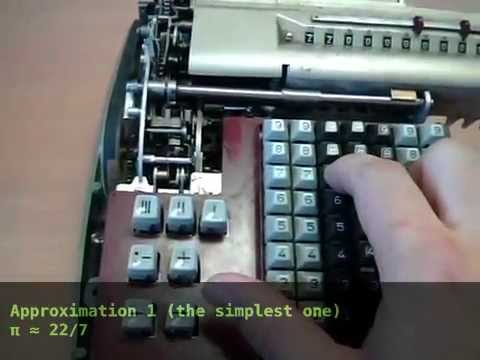 The video shows five different approximation of the number $\pi$. Among others, on these practical examples we show how to obtain more digits of the quotient than the length of quotient register allows. 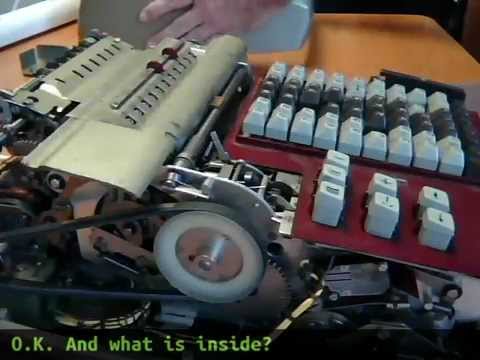 Brunsviga with mechanical cut and paste 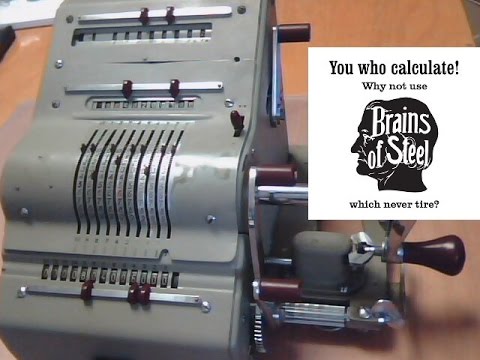 The video introduces shortly the German mechanical calculator Brunsviga. Brunsviga's were one of the best calculators, especially thanks to the main inventor of the company, Franz Trinks.

The video is focused to the back transfer - copying result from output back to input with pure mechanics. Application of this feature to practical computations are shown. The calculator on the video is from 50's, but it is just redesigned model of Franz Trinks from 30's. 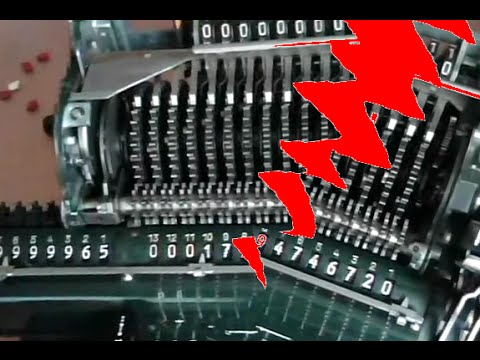 The video describes an amazing mechanical calculator Hamann Manus R. The unique feature of this calculator is, that you do not perform repetitive subtraction when evaluating quotient, but the division is completely automatic. The user just moves the crank like when operating meat grinder. 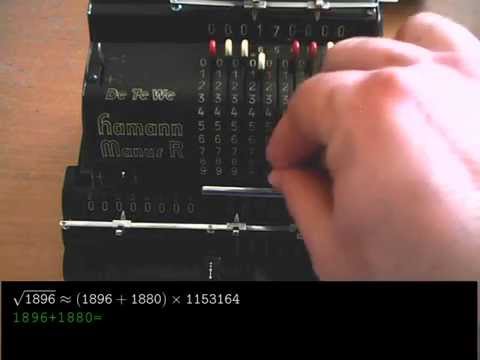 Does your Odhner calculator calculate without errors? 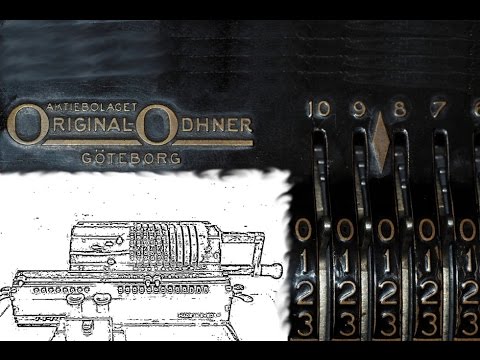 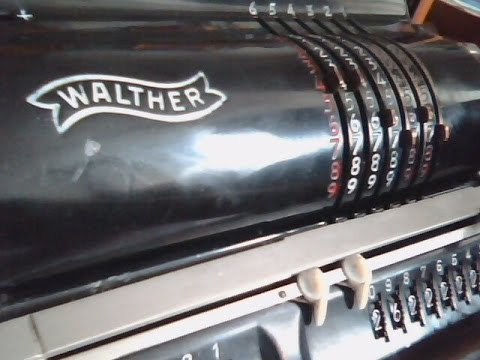 Walther company, famous producer of guns, was one of successful manufacturers of mechanical calculators. The video shows neat small calclulator RKZ10 which is used to evaluate a quotient with amazing precision: 60 digits. The rare feature of this calculator is the possibility to set the numbers in the output register without touching the input register and without turning the crank. 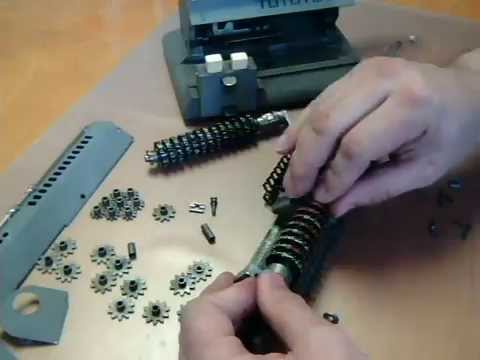 The Odhner mechanical calculator was partially broken. It was not possible to set the counter register to zero. I disassembled the counting unit and fixed the problem, caused by brute force used by previous owner. The video is taken by assembling parts together. The pleasant music is provided by the group Naslouchej mandarinkam.

Addition and subtraction on Addiator 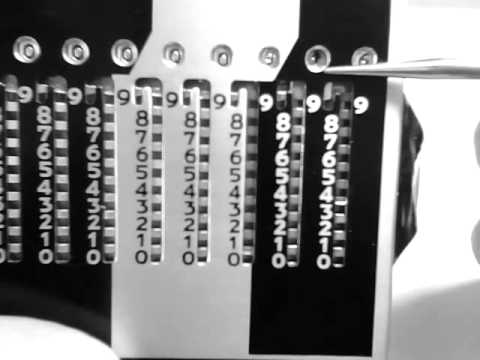 This is a high-tech version of abacus, invented 1889 and used up to 1970 (the rise of electronic pocket calculators). The pocket size calculator with stylus allows to sum and subtract numbers. There was not an automatic tens carry, but the calculator included flag which indicate, that the tens carry has to be done by the user. Multiplication and division is possible using repetitive subtraction, but is you compute nontrivial product of quotient, the computation is lengthy and cumbersome.

There are several very interesting video channels on Youtube. Let me know if I missed any of them and I will be happy to add it in the list. Most of them are simply amazing. The videos are very different. Some of the authors show excellent details of the machine, inside construction, repair details. The slow motion videos of Jaroslav Pochylý allow to catch the details of the computing cycle. Some users explain and demonstrate how people used these devices several decades ago. Some of the video channels are active and the list of the videos on the channel is growing, some of them contain just several old videos.

From here you can search these documents. Enter your search terms below.